Henry Dashwood (late husband)
Mrs. Henry Dashwood is a character in Sense and Sensibility. She was married to Henry Dashwood before she became his widow. She has three daughters, Elinor Dashwood Ferrars, Marianne Dashwood Brandon, and Margaret Dashwood. She has one stepson, John Dashwood, and is the mother-in-law of Edward Ferrars and Colonel Brandon. She is 40 years old at the beginning of the novel. She is a cousin of Sir John Middleton.

Death of her Husband[]

Due to the inheritance after her husband's death, John Dashwood would receive Norland Park, the family's home in Sussex[1]. Henry Dashwood was saddened that he couldn't leave anything of note to his wife and daughters, because he knew they would benefit off Norland far more than John nor Fanny would. John was going to be generous to his stepmother and half siblings, but Fanny stoked his greed and encouraged him, successfully, to give them nothing.

Fanny Dashwood descended immediately on Norland, bringing her young son Harry Dashwood, with her. This was done immediately after the funeral, with no word to Mrs. Dashwood[1]. This angered and disgusted Mrs. Dashwood, who thought that this was as better a time as any for Fanny to show she had some decency, and then she subsequently showed she had none, for all her wealthy upbringing. Mrs. Dashwood would have immediately left the property in her anger, if Elinor had no convinced her to stay and wait[1]. Once Fanny installed herself as mistress of Norland, the old mistress and family were degraded to visitors[2]. They remained and Norland for several months in order to look for a new home[3].

After several months, Mrs. Dashwood noticed an affection growing between Elinor and Edward Ferrars, who was very different from his sister. He was the heir to a large fortune, but he had a kind and genteel demeanor, which his sister lacked[3].

Mrs. Dashwood received a letter from her distant cousin, Sir John Middleton of Barton Park in Devonshire. He wrote that he had a cottage that would perhaps be suitable for them for a period of time[4]. Mrs. Dashwood was overjoyed to be able to escape Norland. When she told John and Fanny, they were extremely surprised, perhaps because they never imagined that generosity existed in the world[5]. Mrs. Dashwood and her daughters packed up what little furniture and belongings they had left, and departed[5].

"As a house, Barton Cottage, though small, was comfortable and compact; but as a cottage it was defective, for the building was regular, the roof was tiled, the window shutters were not painted green, nor were the walls covered with honeysuckles."
—Barton Cottage lacking the cottage idyll, but being perfectly functional as a home[6]

Since Mrs. Dashwood rarely saved money and only had £500 a year, they couldn't make a lot of the alterations they wanted to and were wise enough to live with the house as it was[7].

Much like her daughter Marianne, she is very emotive and often makes poor decisions based on emotion rather than reason[1]. She was also not a frugal woman, since she did not need to be. This made it difficult to do renovations and make ends meet while living at Barton Cottage[7]. 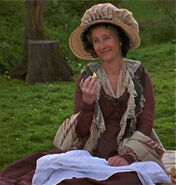 Gemma Jones as Mrs. Henry Dashwood in Sense and Sensibility (1995)
Community content is available under CC-BY-SA unless otherwise noted.
Advertisement