Mrs. Bennet (née Gardiner[1]) is a main character in Pride and Prejudice. Together with her husband, Mr. Bennet, she has five daughters: Jane Bennet Bingley, Elizabeth Bennet Darcy, Mary Bennet, Catherine Bennet, and Lydia Bennet Wickham. She has two siblings, Mrs. Philips and Mr. Gardiner, and is the sister-in-law of Mrs. Gardiner and the paternal aunt of their children. She is also related to William Collins through marriage.

Mrs. Bennet was born to an attorney and his wife, and has two siblings, Mrs. Phillips and Edward Gardiner. Her first name was never once mentioned in the novel, but many readers assume it was either "Jane" (in her novels, such as Persuasion and Mansfield Park, Jane Austen named the oldest daughters after their mothers - Elizabeth Stevenson and Elizabeth Elliot, and Fanny Ward and Fanny Price) or "Fanny" (which is commonly used in fanfiction).

Twenty-three years before the events of the novel, Mr. and Mrs. Bennet married. Mr. Bennet had been captivated by his wife's youth and beauty, and the illusion of good humour that his wife's charms presented. However, he soon realised that she was of "weak understanding and illiberal mind", and any true affection he had for her ended.

Mrs. Bennet's father left her a settlement and dowry of £4,000, and though it was a good sum, it was still insufficient to ameliorate the deficiency of her husband's fortune[2]. Both husband and wife were also incautious with money - they never practiced economy as they always believed that they would have a son who would, when he came of age, break the entail on Longbourn, and provide for Mrs. Bennet (in the event she was widowed) and any younger children that they might have. Instead, they had five daughters, and ultimately gave up all hopes of producing a male heir.

Unfortunately, by then, it was far too late to start saving - Mrs. Bennet had no economical skills, and though Mr. Bennet ensured the family did not exceed its income, he also did not take any measures to increase his wealth. The very worst thing was that, without a son to break the entail, Mr. Bennet's cousin, Mr. Collins, would inherit Longbourn upon Mr. Bennet's death.

Hence, Mrs. Bennet was obsessed with marrying off her daughters as means of providing support for herself - and them - following her husband's death.

Mrs. Bennet learns that Netherfield is let at last from her neighbor Mrs. Long.

Mrs. Bennet was not much improved by the marriages of three of her daughters. She continued to be silly, which continued to entertain her husband.

Mrs. Bennet often visited Mrs. Bingley and talked of Mrs. Darcy after her eldest daughters' weddings. Her vicinity to Netherfield was part of the reason why the Bingleys moved from Netherfield and bought a house in a county neighboring Derbyshire.

"...captivated by youth and beauty, and that appearance of good humour..."

In her youth, Mrs. Bennet had been a beautiful woman whose charms gave her the illusion of being good-humoured as well. Mr. Bennet once teased her for being as beautiful as any of her grown-up daughters[3], which indicates that she had retained some of her beauty, despite having been married for twenty-three years when the events of the novel commenced. However, her exact age was never revealed or confirmed.

Mrs. Bennet is described as "a woman of mean understanding, little information, and uncertain temper" who fancies herself nervous when she is discontented. She openly favors Jane and Lydia over her other daughters because of Jane's beauty and Lydia's high spirits. Her sole purpose in life is marry off her daughters to wealthy men, and when unsuccessful, she consoles herself with visiting their neighbors and gossiping. 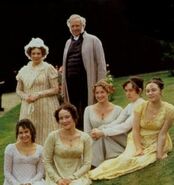 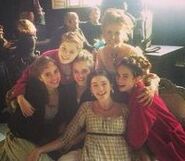 Mrs. Bennet with All Her Daughters in "Pride and Prejudice and Zombies" (2016)