Mr. Bennet is a major character in Pride and Prejudice. He is married to Mrs. Bennet and they have five daughters, Jane Bingley, Elizabeth Darcy, Mary Bennet, Catherine Bennet, and Lydia Wickham. Mr. Bennet is father-in-law to Charles Bingley, Fitzwilliam Darcy, and George Wickham. He is also a cousin of William Collins, who is heir presumptive of Longbourn.[1]

Mr. Bennet is the patriarch of the Bennet family and the owner of Longbourn. His name is never mentioned in the novel, nor is his age but it's safe to say that he is older than his wife (as her youth is what attracted him to her) and is old enough to be married 23 years. He lives at Longbourn, located in Hertfordshire near the imaginary town of Meryton.

His education specifics are unknown, but he is fond of books and is known for his sarcastic wit. His strongest relationship is with Elizabeth, as she is the most level-headed and observant of his daughters. He has a hard time letting her go when he agrees to her marriage with Mr. Darcy.

Mr. Bennet's estate, Longbourn, is entailed to a male member of the family, in this case Mr. Collins. Since the cousin is so far removed from the family, they cannot rely on him to care for the wife and daughters upon Mr. Bennet's passing like they would if the heir was a son. This forces Mrs. Bennet to be incredibly anxious about marrying off her daughters, and their lack of success at first, as they would be truly destitute if Mr. Bennet died before any of the girls were to marry. Due to two of his daughters marrying extremely wealthy gentlemen, this is not a worry by the end of the book, as all female members of the Bennet family would be well cared for upon Mr. Bennet's passing.

Mr. Bennet is best known for his sarcastic wit, often sharpened on his family members (particularly his wife). He appears happiest when left alone and will typically choose the path of least resistance, without consideration of the consequences. While his love of independence has kept his family out of debt, he has not bothered to make any plans or provisions for them after his death, at first this was because he intended to have a son who would take responsibility for Mrs. Bennet and any other children and later this was due to habit. 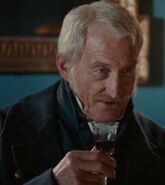 Charles Dance as Mr. Bennet in Pride and Prejudice and Zombies
Community content is available under CC-BY-SA unless otherwise noted.
Advertisement