Anne,[1] Lady Russell is a character in Persuasion. She is a widow, but was married to a titled gentleman of means, the late Sir Henry Russell. She lives near Kellynch Hall, the family seat of the Elliot family. She was extremely good friends with the late Lady Elliot. She is even godmother to Anne Elliot, the middle daughter of Sir Walter and the late Lady Elliot[2]. It was thought that Lady Russell and Sir Walter would marry after the deaths of both their spouses. They did not wed, however, remaining good friends instead. Anne became her favorite of the Elliot girls because Lady Russell saw her old friend in Anne[2].

When Anne developed an affection for Frederick Wentworth, a naval captain with no fortune, both she and Sir Walter were alarmed. She, however, kept her affection for Anne after this, while Sir Walter did not, believing that Anne would try to degrade their family with an unsuitable match. She managed to get Anne to break it off. If it had only been Sir Walter vying for the end of the match, Anne would've gone through with it; but she and Lady Russell loved each other like a mother might a daughter and vice versa[3]. She hated Wentworth, as she thought his wit was devilish and vulgar.

When Charles Musgrove, the heir of Uppercross estate, pursued Anne for his wife, Anne turned him down. Most of the Musgrove family believed, including Louisa Musgrove, that Lady Russell had talked her out of the match. They liked Anne the best of the Elliot girls, as she was not prone to the "Elliot pride" that her father and sisters were[4]. Lady Russell actually approved of the match, hoping to get Anne away from her self-indulging father and sister. Anne rejected the match, though, to Lady Russell's dismay.[5] This forced Charles to propose to Mary instead. They married in December of 1810[2].

Upon hearing that Sir Walter had sunk into grave debts, Lady Russell and Mr. Shepherd, Sir Walter's financial adviser, decided that the Elliots should vacate Kellynch for the season and put it up for rent. Sir Walter decided to go to Bath with his eldest and favorite daughter, Elizabeth, while Anne would stay at Uppercross with Mary and her family.[5] Lady Russell was annoyed at Elizabeth when the lady decided to bring Mrs. Clay to Bath with her instead of Anne. Lady Russell quit Somersetshire for a few months due to prior engagements, but worried about Anne[7].

Months later, Lady Russell returned to Somersetshire and met with Anne. She was coldly victorious to discover the Captain Wentworth had moved his affections to the lesser Louisa Musgrove. She was also happy to see that Anne seemed to be prettier and plumper[8]. She and Anne visited Kellynch and the Crofts, and Lady Russell was happy to meet Mrs. Croft, although she thought Admiral Croft's manners were on the rougher side[8]. She also heard about Captain Benwick, a friend of Captain Wentworth's who seemed to have an interest in Anne. As Lady Russell is as judgmental as they come, she said she would reserve her opinion until after she met Benwick. Charles Musgrove was convinced that Lady Russell would like Benwick; Mary Musgrove was convinced that she would not[9].

Lady Russell and Anne then went to Bath where Sir Walter, Elizabeth, and Mrs. Clay were staying in Camden-place. Lady Russell was pleased to learn that William Elliot, Sir Walter's heir, had learned the error of his ways and was trying to reconcile with the head of the family[10]. When Lady Dalrymple came to Bath, she joined the Elliots when they visited her and the lady's daughter. She was less impressed than Sir Walter and Elizabeth with the dowager viscountess, but more impressed than Anne. Although they didn't have the elegance that one would expect in members of the aristocracy, she knew that no harm would come out of such an acquaintance[11]. She also encouraged Anne to visit her old governess and dropped her off. Elizabeth and Sir Walter, in a fit of usual snobbery, criticized Anne for choosing the acquaintance of a governess over a dowager viscountess[12].

Lady Russell began to see Mr. Elliot grow attached to Anne, and fancied a connection between the two of them. Anne, who viewed William only as a friend, thought they would not suit. Lady Russell still harbored the dream of seeing Anne situated as mistress of Kellynch and styled as "Lady Elliot", just like her late friend[12].

Lady Russell is a formidable woman, who is very influential in the area around Kellynch Hall. The lady primarily favors well-educated people who are well read and interested in improving themselves. She is not well disposed towards humor with no education. She is described as having strict integrity and honor.

Although she loves Anne, it can be argued that Lady Russell is rather antagonistic towards Anne's happiness, even if not meaning to be. Lady Russell's belief that Anne should have Lady Russell's version of the best in life has kept her from a love match with Frederick Wentworth and a match with Charles Musgrove, leaving Anne headed for spinsterhood after heartbreak. 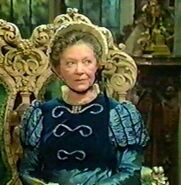 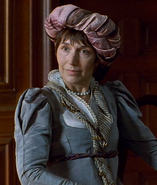 Alice Krige in Persuasion (2007)
Add a photo to this gallery

Retrieved from "https://janeausten.fandom.com/wiki/Lady_Russell?oldid=7312"
Community content is available under CC-BY-SA unless otherwise noted.