George Wickham is a major character in Jane Austen's Pride and Prejudice. He was the godson of the late Mr. Darcy, father of Fitzwilliam and Georgiana Darcy. He was most likely named after his godfather, as was the custom in the Regency era. He has dark hair and light skin.

He is the husband of Lydia Bennet Wickham, the son-in-law of Mr. and Mrs. Bennet, and the brother-in-law of Jane Bingley, Elizabeth Darcy, whom he briefly courted, Mary Bennet, and Kitty Bennet.

Wickham was raised in Derbyshire, at Pemberley, the home of his godfather, who thought of him as a son and provided for him likewise. When Mr. Darcy died, he meant to leave Wickham with a parsonage and a steady income. His son, Fitzwilliam Darcy, made sure that Wickham received his inheritance, but Wickham refused it, and instead asked for a lump sum of money, which Mr. Darcy granted him. Wickham spent all the money, becoming broke quite soon, and wrote to Mr. Darcy, asking that he give him the living he was supposed to inherit. Mr. Darcy refused, aware of Wickham's debts.

Wickham made plans to gain ahold of his godsister Georgiana's inheritance of £30,000. He followed her to Ramsgate, and conspired with Mrs. Younge to meet Georgiana and convince her they were in love. He convinced her to elope to Gretna Green, when she was only fifteen. Darcy kept anything from happening, and saved his sister. Since then, there has been a rivalry between Wickham and Darcy.[1]

Wickham is forced to join the army in order to finance his life.

Wickham arrives in Meryton with the rest of the officers in Colonel Forster's regiment. While in Meryton, he makes the acquaintance of the Bennet family. Mr. Darcy happens by, and the two have a tense exchange, which is witnessed by Elizabeth Bennet.[2] Elizabeth later asks why Wickham that was. Wickham lies to her, gaining her sympathy. He claims to have been denied the inheritance because Mr. Darcy was jealous of his father's partiality to Wickham. Elizabeth is shocked to hear of Wickham's account of Darcy, and swears to herself to never like Mr. Darcy.[3] She begins to like Mr. Wickham, and hopes to continue on with their relationship.[4] She hopes to see him at the Netherfield ball, but he is not present, disappointing Elizabeth.[5] When Elizabeth later meets Wickham, he confirms that he was trying to avoid Mr. Darcy.[6]

Elizabeth starts to see Wickham more often after Mr. Darcy leaves town with his friend, Mr. Bingley. She introduces him to her parents, as well as her aunt, Mrs. Gardiner, who all take a liking to him.[7] Mrs. Gardiner, though, recognizes her niece's attachment, and warns Elizabeth not to become invested in a future with Mr. Wickham because neither of them have money. Elizabeth heeds her advice, especially when Wickham starts to take an interest in Mary King, who has recently inherited a fortune of £10,000. Though Elizabeth knows he's partial to someone else, she's not upset.[8]

After Elizabeth rejects a proposal from Mr. Darcy during her visit to Hunsford, Darcy writes a letter to her, revealing the truth about Wickham's past. Initially skeptical of Mr. Darcy's account, she recounts Wickham's inconsistent behavior and talks, and realizes Mr. Darcy is telling the truth.[9] Mary King is taken away from Meryton, ruining Wickham's plan to gain her fortune.[10]

When Elizabeth returns to Longbourn, she finds out the militia are heading to Brighton for the summer. Wickham meets her before leaving, and she mentions to Wickham that she saw Mr. Darcy.

While Elizabeth is touring around Derbyshire, she receives a letter from her sister, Jane, informing her that Wickham has run off with their youngest sister, Lydia, who went with the militia to Brighton as a friend of Colonel Forster's wife. Jane says they believe Wickham and Lydia have run off to Gretna Green to get married.[11] However, Colonel Forster later finds out from another officer, Denny, that Wickham had run off to avoid the debts that he owes, and he was never planning to marry Lydia, ruining her and the Bennets.[12] The town of Meryton soon no longer cares for Wickham, finding out about his numerous debts and conning various tradesmans' families.[13]

Mr. Bennet eventually receives a letter from Mr. Gardiner that he has found Lydia and Wickham, and they are not married, but will be soon. Wickham agrees to accept Lydia's inheritance of £1,000, upon her parents' deaths, as well as a yearly income of £100. Elizabeth is shocked by the small amount, and both she and Mr. Bennet surmise that Mr. Gardiner paid off all Wickham's debts to make this possible, which Mr. Bennet surmises is no less than £10,000.[14]

Wickham and Lydia marry, and visit Longbourn to see her family. There, Wickham is greeted with a range of emotions, from joy to indifference.[15] Elizabeth later finds out from Mrs. Gardiner that Mr. Darcy was the one who made the marriage possible. Darcy went to London to find them himself after learning of the elopement from Elizabeth. He looked up Mrs. Younge, and found Wickham and Lydia from her direction. Wickham still wanted to gain his fortune by marrying a rich heiress, and was not interested in marrying Lydia. Mr. Darcy then paid off Wickham's debts, as well as his commission, and the wedding expenses, saving both Lydia and the Bennet family's honor.[16]

When Wickham finally spoke with Elizabeth at Longbourn, he again tried to steer the conversation to talking about Mr. Darcy in an unfavorable light. However, Elizabeth slyly told him that she was aware about the truth of his past, and that he had lied to her. Though Wickham tried to press to find out exactly what she knew, she chose to drop the subject, not wanting to argue with Wickham in front of Lydia. Wickham did not speak to Elizabeth again, aware she knew the truth, and departed with Lydia to Newcastle for his new position.[17]

When Wickham and Lydia learned that Mr. Darcy was marrying Elizabeth, Lydia wrote to her sister, probably with encouragement from Wickham, asking for an annual stipend to be provided for them. Elizabeth, though, refused to give them any money. Lydia was no better than Wickham with money, and the two kept incurring debts on their various activities of frivolity. They were never in one place for long, moving around to find cheaper accommodations. Whenever they did move, Elizabeth or Jane, who married Mr. Bingley, would pay off the debts they left behind. Wickham was not allowed at Pemberley, but Darcy would help him in his career, for Elizabeth's sake.[18]

Wickham is a handsome man with "a fine countenance, a good figure, and very pleasing address."

Rebecca Dickson (author of "Jane Austen: An Illustrated Treasury") describes Wickham as "Peter Pan with a gambling problem". Wickham is a very charming man, an excellent conversationalist and possesses a gift for making friends. Unfortunately, he is also an immoral, extravagant liar who has no problem with using (or ruining) other people in order accomplish his own ends. He tends to live in the moment without giving much thought to the future and has by so doing thrown away many of the advantages that he was given due to old Mr. Darcy's patronage. Until his marriage to Lydia, his overall plan in life was to marry an heiress. He is not happy with his marriage.

Lydia is Wickham's wife through an "arranged marriage" set by Darcy. He took Lydia with him when he left the militia, running away from his gambling debts, though with no intention of marrying her. In the end, he married her in return of Darcy paying off his debts. According to Elizabeth, Lydia's love for him is deeper than his and they do not live in a blissful marriage as they are always working or moving from one place to another.

Elizabeth is Lydia's sister and she later became his sister-in-law. At first she is charmed by Wickham's good looks and charisma. However, she never saw that Wickham was not who he appeared to be, despite seeing the tense interaction between him and Darcy, and her aunt warning her to be careful as the family doesn't have a lot of money. It was not until she refused Darcy's first marriage proposal and read his letter, revealing that Wickham sought to elope with Georgiana for her inheritance, that she realises his true nature. After Lydia married him, Elizabeth rarely spoke to him and didn't argue with him in front of Lydia to preserve Lydia's feelings.

Darcy was a former childhood friend to Wickham. Wickham's father was a steward to Darcy's father and he was present when Darcy's father passed away. They both went to school together but Wickham was lazy and left in disgrace. He is always asking Darcy for more money to deal with his gambling debts. This causes a strained relationship between the two characters. When Darcy found Lydia and Wickham in London eloping with each other, Darcy is able to bribe him to marry Lydia to save the Bennet family from disgrace. He only helps him find work under Elizabeth's instruction but no more else.

Georgiana is Darcy's younger sister. He tried to elope with her with the help of Mrs. Younge, Georgiana's former governess. When Darcy found out about the affair, Darcy wrote him off and removed the governess from Georgiana's care. 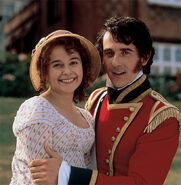 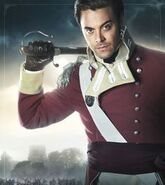