Mr.Bingley has two sisters, Caroline and Louisa. In Chapter 3 he is said to have five sisters, but that may be misinformation spread about Meryton via gossip and speculation.

Bingley decided to rent Netherfield Park, an estate located in Hertfordshire near the town of Meryton. He had £5,000 a year,[1] a huge sum. This made him an attractive marriage prospect, as proclaimed by Mrs. Bennet.[2] Bingley was immediately called upon by members of the village who were most interested in marrying off their daughters, like Mr. Bennet and Sir William Lucas.[3] Mr. Bingley brought his two sisters, Caroline and Louisa, and brother-in-law, Mr. Hurst, to Netherfield, and was also joined by Fitzwilliam Darcy, one of his closest friends.

Bingley first made his acquaintance with the Bennet sisters during a public ball at Meryton, and he was very taken with the eldest, Jane. Bingley was rather aghast at the aloofness of his friend Mr. Darcy, and how he would refuse to dance with anyone but Bingley's sisters. Bingley tried to convince Darcy to dance with Jane's younger sister, Elizabeth, but in vain.[4] He was pleased with his neighbors, and said he had never seen more pleasant people or prettier women in his life, and that there was a promising lack of stiffness and snobbery.[5] This is in direct contrast to Mr. Darcy, however, who saw a collection of people in whom there was little beauty and no fashion, and the only 'handsome' girl was Jane. Both Miss Bingley and Mrs. Hurst agreed with him, but thought Jane a sweet girl, thinking nothing of it. Mr. Bingley saw this as encouragement and a commendation.[5]

When Jane caught a cold due to riding through the rain for a visit with his sisters, Mr. Bingley generously gave her a room. He was very anxious about her health, and Elizabeth thought more of him for it.[6] When Elizabeth came to Netherfield to look after Jane, Bingley provided her a room to stay in so she could take care of her sister. Mrs. Bennet also visited with her other daughters, Mary, Kitty, and Lydia, who encouraged Mr. Bingley to hold a ball at Netherfield Park soon. Bingley agreed to do so, once Jane was better. Bingley was true to his word, and personally invited the Bennet family to a ball at Netherfield in November.[7]

Mr. Bingley had been fostering a tendresse for Jane, which his sisters and Mr. Darcy started to notice at the Netherfield ball. His sisters, horrified at the thought of being connected to the Bennet family by marriage, convinced him to leave Hertfordshire. Though he had every intention of returning,[8] when he got to London, Mr. Darcy, Caroline, and Louisa worked together to dissuade Bingley from an engagement to Jane. The three did everything, including conceal from Bingley about Jane being in London. Mr. Darcy mostly did it because he believed Jane to be indifferent,[8] which would cause Bingley harm if he actually married her. Bingley was persuaded not to return, albeit with a heavy heart. Caroline also wrote to Jane, saying how Bingley seemed partial to Georgiana, Mr. Darcy's sister, and she hoped they would soon marry.[9]

Mr. Bingley traveled to Darcy's estate, Pemberley, in Derbyshire the following summer with his family and Georgiana. When Bingley found out that Elizabeth was staying nearby at Lambton, he was eager to meet her, and joined Darcy and Georgiana when they went to meet her the day they arrived.[10] While Bingley was talking to Elizabeth, she noticed that he was not partial to Georgiana at all. Though she never directly asked, Elizabeth inferred from their conversation that Bingley was still attracted to Jane.[10]

Return to Hertfordshire and Marriage[]

Mr. Bingley returns to Netherfield Park a few months later with Mr. Darcy, but not Caroline, Louisa, or Mr. Hurst. He went to Longbourn with Darcy to call on the Bennet family, where Bingley again showed an attraction towards Jane.[11] Darcy left for London, but he confessed to Bingley his concealment of Jane being in London for several months after they left Netherfield. Though Bingley was angry, his good nature made him quickly forgive his friend.[12] Bingley eventually proposed to Jane, who happily accepted. After Mr. Darcy returned, the two went to Longbourn, where Darcy later became engaged to Elizabeth. A delighted Mr. Bingley called on the Bennet family the following day, and arranged for Darcy and Elizabeth to be alone to help facilitate their engagement.[13]

After Mr. Bingley and Jane's marriage, the two stayed at Netherfield for only a year, finally unable to handle the overbearing attentions of her family. Bingley purchased an estate within thirty miles of Pemberley, which enabled him and Jane to be closer to Darcy and Elizabeth.[14] 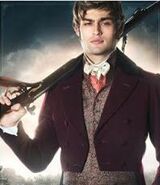 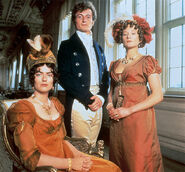