"Of music! Then pray speak aloud. It is of all subjects my delight. I must have my share in the conversation, if you are speaking of music. There are few people in England, I suppose, who have more true enjoyment of music than myself, or a better natural taste. If I had ever learnt, I would have been a great proficient. And so would Anne, if her health had allowed her to apply. I am confident that she would have performed delightfully."
—Lady Catherine to Colonel Fitzwilliam and Elizabeth Bennet[1]

As the daughter of an earl, she is styled as "Lady Catherine" instead of "Lady de Bourgh", the usual style for women married to baronets or knights. She is also the sister of the late Lady Anne Darcy, which makes her the maternal aunt of Fitzwilliam and Georgiana Darcy. Through her brother, the current Earl——,[2] she is also the paternal aunt of Colonel Fitzwilliam.

Lady Catherine was born as one of the children of a wealthy earl. As an aristocrat, she was probably educated in numerous subjects that were expected of a lady of her rank, although she later claimed that she had not learned music.

As the daughter of an earl, it was highly likely that she was presented at Court when she was around the age of 18 in order to begin her London season. Though she ultimately did not marry a peer or an heir to a peerage, she still made an extremely advantageous match: Lewis de Bourgh, a knighted and extremely wealthy gentleman who owned the palatial estate of Rosings Park. Lady Catherine would come to have a daughter, whom she named after her sister, Lady Anne.

It was never specifically revealed or confirmed as to what kind of relationship Lady Catherine had with her sister and her brother (who inherited their father's earldom later on). However, she later claimed she and her sister had planned a betrothal between their children (Fitzwilliam and Anne) when they were still in their infancy, and that it was their favourite wish, though whether this was the honest truth or a mere lie on her part remains a mystery.

Death of Her Husband[]

Her husband, Sir Lewis, died before the course of the novel. Although he was not aristocratic, Lady Catherine still esteemed him and his family greatly, and even once described his family as "respectable, honorable, and ancient, though untitled". The de Bourgh family never saw fit to entail the estate, so it was left to Anne de Bourgh, as opposed to a distant male relative. It is important to note that Lady Catherine likely does not own the estate, and all evidence points to Anne owning it, as she is described as the "heiress of Rosings".[3] Sir Lewis would have had to trust his wife beyond belief to leave his estate to her, as she would have put the estate directly into the ownership of a new spouse if she remarried.

Life as a Widow[]

"The engagement between them is of a peculiar kind. From their infancy, they have been intended for each other. It was the favourite wish of HIS mother, as well as of hers. While in their cradles, we planned the union: and now, at the moment when the wishes of both sisters would be accomplished, in their marriage, to be prevented by a young woman of inferior birth, of no importance in the world, and wholly unallied to the family! Do you play no regard to the wishes of his friends? To his tacit agreement to Miss de Bourgh? Are you lost to every feeling of propriety and delicacy? Have you not heard me say, that from his earliest hour he was destined for his cousin?"
—Lady Catherine to Elizabeth on the subject of Darcy's unofficial betrothal[4]

Lady Catherine still harbored the hope that her daughter and her nephew would be joined in marriage, even when Mr. Darcy was 25. She also became the patron of Mr. Collins, a man who admired her greatly. She offered him a parsonage and a rectory. According to Mr. Collins, Lady Catherine did not mind if Mr. Collins left the rectory for a few Sundays[5].

When Elizabeth Bennet came to stay with the Collinses, Lady Catherine invited the three of them to dinner. She was impressed and slightly shocked with Elizabeth's opinionated demeanor, but didn't think much of her family or the girl in general.

She was angered to hear a rumor that Mr. Darcy was engaged to Elizabeth and went to Longbourn immediately to learn the truth. Elizabeth denied that they were engaged, but when Catherine tried to force Elizabeth to never accept an engagement, Elizabeth adamantly refused to agree, which shocked Catherine.[6] She left Longbourn in a foul mood, and immediately called on Mr. Darcy in London, telling him of her conversation with Elizabeth. She thought that she had deterred him from marrying Elizabeth, but instead, she gave her nephew hope that Elizabeth returned his affections.[7]

Mr. Darcy later wrote a letter to Lady Catherine informing her of their engagement, which angered her immensely. However, she eventually came around, and visited the couple at Pemberley, accepting the marriage.[8]

"Obstinate, headstrong girl! I am ashamed of you! Is this your gratitude for my attentions to you last spring? Is nothing due to me on that score? Let us sit down. You are to understand, Miss Bennet, that I came here with the determined resolution of carrying my purpose; nor will I be dissuaded from it. I have not been used to submit to any person's whims. I have not been in the habit of brooking disappointment."
—Lady Catherine to Elizabeth Bennet[4]

Lady Catherine is haughty, pompous, domineering, and condescending. Her wealth and station allow her to be rude to people she considers beneath her, with little consequences, especially seen in her interrogation of Elizabeth Bennet while at Rosings Park. Because of her upbringing she expects people to follow her like sycophants, which is presumably why she enjoys the company of William Collins so much. Mr. Collins encourages these characteristics by deferring to her in every aspect. Elizabeth treats her with respect but is not intimidated. To Lady Catherine's shock, Elizabeth chooses not to answer one of her ruder questions. It's also important to note that her behavior is not necessarily exemplary of the aristocracy, and she was intentionally made to be uncouth and rude. Such question were an example of ill-breeding during the Georgian and Regency periods.[9]

She also believes her advice to be most exceptional, and that anyone and everyone should be obliged, and grateful, to take it[10].

Lady Catherine is a tall, large woman whose strong features suggested that she had been a beauty in her youth.

As Sir Lewis's widow, Lady Catherine is extremely wealthy. There is no entail on Rosings, which is why Anne de Bourgh is the owner of the estate.[10][11] 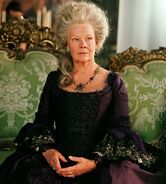 Barbara Leigh-Hunt in the 1995 mini-series

Lindsay Duncan in Lost in Austen
Community content is available under CC-BY-SA unless otherwise noted.
Advertisement