The Jane Austen Wiki
Register
Don't have an account?
Sign In
Advertisement
in: Characters in Persuasion, Female characters (Persuasion)

Anne Elliot (later Anne Wentworth) is the protagonist of Persuasion. She is the middle daughter of Sir Walter Elliot, a baronet; and the late Lady Elliot. Anne was born August 9th in 1787. She has two other sisters, one older, Elizabeth; and one younger, Mary Musgrove. She is her father's least favorite child, since he does not think her of very much beauty or consequence, and thus not likely to marry high enough to bring pride to the Elliot family[3]. She is, however, the favorite of her late mother's best friend, Lady Russell. Anne is also Lady Russell's goddaughter.

In 1806, Frederick Wentworth, a naval captain, took up residence at Monkford estate, the house of which his brother was curate. Anne developed a strong affection for him, and he for her. He was brilliant and she absolutely adored his sense of humor and his wit. Her father, however, did not approve, and even saw the connection as degrading due to his lack of fortune and lower status in the world. Sir Walter developed a dislike for his middle daughter because he thought she was overlooking her duty to the family. Even Lady Russell, who favored Anne over the other Elliot sisters, took Sir Walter's side in this instance. If it were only her father who protested the match, Anne would've gone through with it; but she harbored a deep love for her godmother and she took their advice in breaking it off with Wentworth. The captain was deeply hurt and felt ill-used, and he left Monkford for the navy again. He left his mark on Anne though, who lost her beauty due to heartbreak, and she never replaced him with another man[4].

Sir Walter fell into a lot of debt due to overspending, as there was no Lady Elliot to bring him back from his lack of frugality. Mr. Shepherd, her father's lawyer and adviser, told him that he should remove the family from Kellynch. Sir Walter originally wished to go to London, but Shepherd and Lady Russell feared that he would resort to overspending in the sumptuous city and convinced him to go to Bath instead[5].

In the meantime, the Elliots put Kellynch up for rent. The Crofts decided to take it, much to Anne's dismay, as Mrs. Croft is Captain Wentworth's sister[6]. She soon learned that Captain Wentworth was to stay with his sister and brother-in-law at Kellynch while she stayed with her younger sister and her husband's family at Uppercross, which was unsettling for her[6].

Anne was nervous to see Captain Wentworth, who, after reuniting with Anne, told Henrietta Musgrove that Anne was so altered in appearance that he wouldn't have known her. Mary Musgrove said this was ungallant, and at first Anne was dismayed, but then the words sobered her nerves and agitation and made her happier[7]. They were later thrown into quite a few dinners and events together, but things remained awkward. They said so few things to each other, beyond what was required of basic civility. This kind of shocked Anne, who remembered a time when it would be difficult to get them to stop speaking to each other[8].

In the subsequent days, Wentworth spent a lot of time at Uppercross, where he received undying interest and admiration from Louisa and Henrietta Musgrove, not to mention the Miss Hayters. This was painful for Anne, since he only treated her with cold civility and talked more with the Miss Musgroves and the Miss Hayters. It was clear that he did not share her regard for him[8]. Anne spent those days observing who would be best for Wentworth, and who he would choose for a wife. She knew that Henrietta was the prettier of the two, but that Louisa had a certain vitality that might attract him. She was distressed that she did not know his preferences as she had used to[9]. Mary thought it would be capital if Wentworth was made a baronet for his heroics and then he would be "Sir Frederick" and Henrietta "Lady Wentworth". Mary also wanted Henrietta to be the one he was interested in to end Charles Hayter's suit, as she had inherited her father's snobbery[9].

Anne went to Bath with Lady Russell to stay with her father and sister in their fashionable rented house on Camden-place. Her father and sister regaled her with news of William Elliot, her father's formerly wayward heir who wanted to make amends. Mr. Elliot had been introducing them to the cream of Bath society, which Sir Walter and Elizabeth appreciated. It was also hinted that William might have lingering feelings for Elizabeth, a notion that Mrs. Clay encouraged[10]. Anne started to notice that Mrs. Clay was worming her way into Sir Walter's affections, but was relieved to see that Sir Walter did not love the woman[11].

Anne started a friendship with her distant cousin, the heir, who made himself very agreeable. She was pleased that they could have good conversation, which she valued over anything. She did not like Lady Dalrymple, another relation. However, the lady was a dowager viscountess which made her instantly likable to her father and sister, both of whom were obsessed with status[11]. While her family continued to call at the dowager's rental home on Laura-place, Anne visited Mrs. Smith, an old school friend, whom she had heard was in Bath through an old governess[12].

Anne heard in a letter from Mary that Louisa Musgrove had turned her favor from Wentworth to Captain Benwick. Anne was a bit happy about this because it leaves Wentworth single[13]. She ran into Wentworth in Bath and he offered himself as an escort in the rain, as he had an umbrella[14]. He was also invited to the concert hosted by Lady Dalrymple. She became alerted to William Elliot's growing affection for her, which made her very uncomfortable. Later, she learned how horrible William was from Mrs. Smith, who told her all about how the man ruined and impoverished her late husband[15].

After Anne decided to refuse William Elliot if he asked for her hand, Wentworth gave her a love letter personally and entreated her to read it[16]. She rekindled her love and affection with Wentworth, and this time he was successful when he asked her father for her hand in marriage. They even helped Mrs. Smith regain her lost lands in the West Indies[17].

Anne is described to have an elegance of mind and sweetness of character that reminded her godmother, Lady Russell, of the late Lady Elliot. To Lady Russell, Anne was her favorite of the Elliot girls[3].

Previously, Anne had been a very pretty girl, but her bloom had vanished early. This made her the least favorite daughter of Sir Walter's, who placed quite an emphasis on appearances due to his own vanity[3]. Anne is also more sensible than her sisters and father, especially when it came to finances and her father's debt[5].

Anne and Frederick had a whirlwind romance in 1806. When she broke it off, he was angered with her. He left his mark on her, and she never moved her affections to anyone else. She also lost a lot of her beauty and vivaciousness due to heartbreak.

In 1814, the pair met again, but he was disappointed in what he saw. She thought it was awkward to see him again. In 1815, when they both met in Bath, he rekindled his affections for her. She was still in love with him at this point, but she fell even more so when she read his love letter[16].

Like most of her family, she was taken in by William Elliot when he came to reconcile with them in Bath, although she was slightly suspicious of his interest in them at first, since before he showed the opposite of interest in any of them. She was gratified to find that he was an excellent conversationalist, well-educated, and that he shared his views on quite a few things that annoyed her, including Mrs. Clay, whom she suspected was going after her father.

Even though he showed interest in her while he still had her regard, she didn't return it. When she finally heard of his dastardly past from Mrs. Smith, she believed the woman, and chose to cut William from her acquaintance.

The woman was her friend during a very hard time of her life after her mother died. Mrs. Smith brought Anne's happiness back and helped her get over her melancholy and misery. This made it so Mrs. Smith could never be forgotten or ignored, even when the woman was poor. Anne made sure to visit her while in Bath, renewing their friendship. Mrs. Smith shared what she knew of the people in Bath and was even the woman who alerted Anne of William Elliot's dastardly past and even more dastardly intentions for the future.

She and her father do not get along, mostly due to her past involving Captain Wentworth in 1806. She is her father's least favorite daughter, and he even favors non-family members over her. Not even he can deny, though, that she is sensible, even if he does dislike her.

Lady Elliot died when Anne was 14[18], and it broke her heart. She was thrown into melancholy and sadness until Mrs. Smith was kind to her and befriended her. After Lady Elliot's death, Lady Russell became somewhat of a mother to her, as she was Anne's godmother.

Since her mother's death, Lady Russell has become a surrogate mother of sorts for Anne. As the lady is extremely well-read and well-educated, she nurtured Anne's education and intelligence. She wants the best for Anne, which is why she did not like the idea of Anne marrying a man with no fortune nor breeding. What she wants most for Anne is someone who is well-educated and who will nurture intelligence in Anne as a future wife.

Anne does not get along with Elizabeth, although they tolerate each other. She is welcomed more by Mary, but sometimes Mary is intolerable. Both of her sisters have what the Musgroves—Mary's in-laws—refer to as "Elliot pride". This means looking down at others for inferior birth, as well as being generally snobbish and vain. 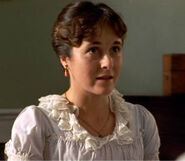